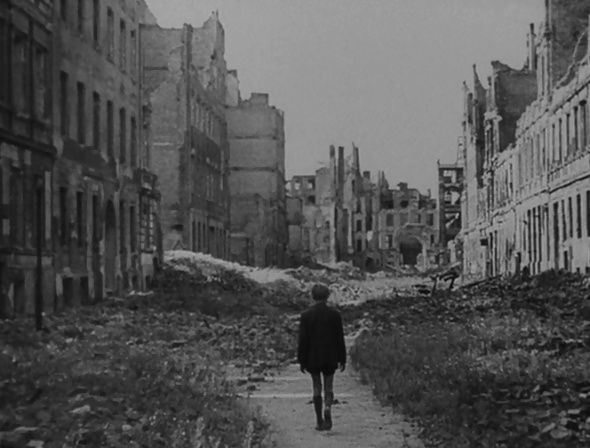 I’ve said all along you’re a tough one… Twelve-year-old Edmund Koeler walks through the nigh deserted streets of Berlin in the aftermath of World War II in director Roberto Rossellini’s examination of the German psyche following defeat.

In the immediate aftermath of World War II, Italian director Roberto Rossellini made two heavily charged films focusing on the effort to free Italy from the grip of Fascism. Both Rome, Open City (1945) and Paisá (1946) took an interesting (if self-serving) perspective when it came to representing Fascism in Italy, almost completely ignoring the Italian Fascists while heaping unending scorn on the Nazis who occupied Italy in the closing days of the war. The Germans in these films were irredeemable monsters who seemed to derive pleasure from murder and torture; almost cartoonish villains that served as a sharp contrast to Rossellini’s more nuanced approach to Italian and Allied characters. So it is something of a surprise that the third film of the director’s famed ‘Neorealist Trilogy‘ — Germany, Year Zero (Germania, anno zero, 1948) — is about the suffering of the German people in the wake of defeat. The film follows the 12-year-old Edmund Koeler as he vainly attempts to help his impoverished family make ends meet in the ruins of Berlin. Like in the two previous films of the trilogy, Rossellini makes use of non-professional actors and location shooting in an attempt to bring gritty truth to what is essentially a melodrama. But set among the destruction and despair, the movie’s greatest strength may be that it offers a perspective on Third Reich Germany that is rarely considered by the victors of the war, that of a damaged country ravaged by bombs and ideology both. (73 min.) END_OF_DOCUMENT_TOKEN_TO_BE_REPLACED 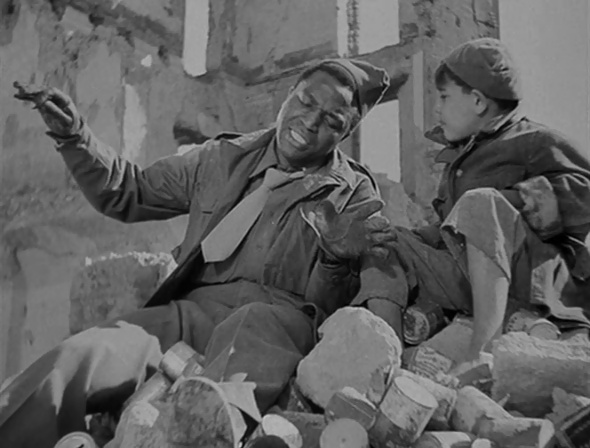 I like this plane! An American soldier drunkenly rants to a thieving Neapolitan street kid in a vignette from Paisà, Roberto Rossellini’s anthology of stories examining the effects of WWII on the Italian people and the Allied soldiers who fought against the fascists.

In 1945, during the closing months of World War II, Roberto Rossellini kicked of the neo-realism film movement in Italy with Rome, Open City, his look at Nazi oppression and the Italian anti-fascist resistance. Rossellini’s follow-up, Paisà (aka Paisan, 1946), is in much the same vein and serves as the second of a trilogy of neo-realist films examining aspects of the Second World War. (The third film — Germany, Year Zero — is also on the Sight & Sound list.) Like in Rome, Open City, Rossellini makes use of on-location shooting and a cast populated largely by amateur actors or non-actors, but the director tries to work on a much larger canvas for this film. Or perhaps that should be canvases, as Paisà is actually a collection of six stories that track the progress of the war as Allied troops move ever northward up the boot of Italy. Each story is an autonomous block, completely separate from the other tales, but they share the common thread of focusing on moments of interaction between Allied personnel and Italians either fighting in or affected by the conflict. Though spiked with humor, romance, and devout expressions of faith, Paisà is not a film that revels in the downfall of fascism. Instead it is unflinching in its presentation of the brutality of oppression and the violence and sacrifice it took to liberate a still-stricken nation. But through all the suffering Rossellini never preaches, it is left to the audience to decide upon the grand purpose of these tales. (120 min.) END_OF_DOCUMENT_TOKEN_TO_BE_REPLACED

Res gestae divina Pina. Actress Anna Magnani, in a stellar performance, gives the evil eye to an SS soldier in Rome, Open City, a story of anti-fascist resistance during the German occupation of Italy in World War II.

With Sicily about to fall into Allied hands and American and British troops threatening moving up the boot of Italy, Fascist overlord Benito Mussolini fell from the heights of power in 1943. In that moment, Italy transformed from ally of Germany to a puppet state controlled and occupied by the Third Reich. Italian director Roberto Rossellini started his career under the fascist regime, churning out propaganda narratives for the reactionary government while secretly filming anti-fascist forces to promote their cause. Almost immediately upon the ouster of German forces from Rome in 1944, Rossellini got to work on the anti-fascist Rome, Open City (Roma, città aperta, 1945). Set during the German occupation of Italy, the film revolves around an attempt to hide an Italian freedom fighter who has caught the attention of the Gestapo. The movie initially abides by the standard dictums of wartime melodrama as the freedom fighter is hidden by a sympathetic couple and an anti-fascist priest, but as consequences pile up for those involved, the film becomes a stark examination of brutality and courage, as well as the divide between those who serve themselves and those who strive for something larger. The characters in Rome, Open City are based on real life persons (indeed the project started as a documentary), and apparently the film cut too close to the bone for post-war audiences of the day. But while it may have fizzled at the Italian box office, Rossellini’s reliance on non-professional actors, down and dirty location shooting, and unflinching look at wartime suffering has come to be seen as not just a classic, but the progenitor of an entire style of cinema: Italian neo-realism. END_OF_DOCUMENT_TOKEN_TO_BE_REPLACED